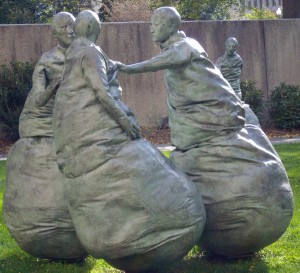 I must admit this series of rotund statues makes me laugh. Like it’s a Weight Watchers meeting and a dispute breaks out as one says, “Who you calling fat?”

That’s the great part of the Hirshhorn Museum and Sculpture Garden whose many modern art pieces can be whatever you want them to be. While I have no idea what most of these things are, I enjoy the outdoor bronze statues.

The Last Conversation Piece was created by Spanish artist Juan Munoz in 1994-95 and quickly purchased by the Hirshhorn. It’s five bronze statues on the Independence Ave. side of the building. Three of them are together as if in a huddle for a little 2-2 touch football.

Munoz was an interesting cat who disdained his family’s wealth to become a New York waiter until breaking through as an artist in the 1980s. He was known for his theme of isolation. Like I said, I don’t understand most of the Hirshhorn but I know what I like. Munoz died in 2001 of a heart attack at age 48 so we can’t get his version.