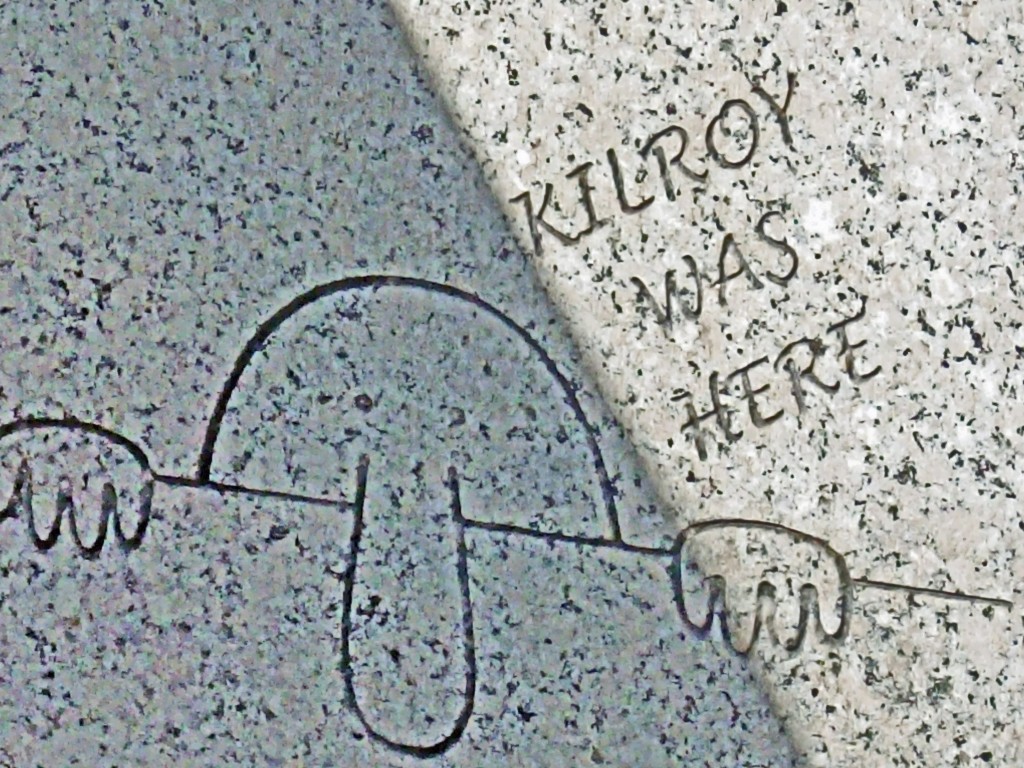 He was the best known image of the American GI during World War II even if everybody claimed his name.

“Kilroy was here” was a popular phrase accompanied by a drawing of a bald man looking over a wall that GIs scribbled as they advanced through Europe. Hitler thought Kilroy was some super spy or a code name. Stalin asked about him, too. Sorry guys, it was a prank.

Kilroy was so popular during World War II that it’s on the outside of the World War II Memorial behind the wall of stars. Look to the left of Delaware and right of Pennsylvania on the outer wall. My photo has a shadow diagonally across and isn’t original art.

The real Kilroy was believed to be James J. Kilroy, a rivets inspector at the Fore River Shipyard in Quincy, Mass. Riveters were paid by the number of rivets each day and would place check marks when finishing each day so Kilroy and other inspectors could count them. But, some riveters started erasing the chalk line and putting a new one several rivets back so they could steal the money from the previous worker. Kilroy would leave his mark by the chalk marks to prevent the next riveter from changing it. Thus, “Kilroy was here” stopped cheats and started a legend. That the rivets were inside ship bulkheads made it seem mysterious whenever opened.

Servicemen liked seeing Kilroy’s name as some sort of protective talisman. Soon, they started marking enemy areas to show successors where the first troops were. It became a badge of honor to do so.

Kilroy markings are reportedly on the Statue of Liberty, Arch de Triomphe, atop Mt. Everest and even on the dust of the moon.