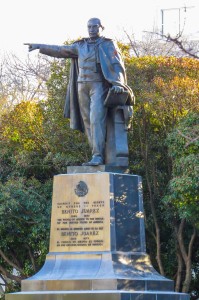 My first thought was “Oh great, another person telling me which way to go.” But as I sat at a red light near the Watergate I realized here was another of the Latin American liberators.

Former Mexican President Benito Juarez stands at the intersection of Virginia Ave. and New Hampshire Ave. NW as part of the Statues of the Liberators that include Simon Bolivar and Jose Artegas closer to the Organization of American States by Constitution Ave.

The bronze statue is part of a 1969 exchange with Mexico where the U.S. sent a statue of Abraham Lincoln. The Juarez statue is a copy of the one in Mexico City. The base includes an urn with soil from Juarez’s native San Pablo Guelatao, Mexico. Juarez’s left arm points into the distance while his right arm touches a book.

Juarez was president of Mexico from 1958-72, tossing the French out of the country in 1866. He’s known as a progressive reformer who modernized the country.