Joseph Henry was no ding-dong 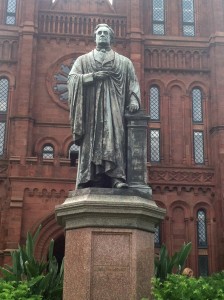 The statue of the man who invented the doorbell stands before a building that has none. Then again, how many castles do?

Joseph Henry was a 19th century scientist whose work in electromagnets led him to become the first Secretary of the Smithsonian Institution. Among his useful outlets for electromagnets was an early version of the electric doorbell in 1831. He also layed the work for the creation of the telegraph, established weather reports using the telegraph and designed lighthouse innovations.

The nine-foot bronze statue facing the National Mall with the Smithsonian Castle behind it was paid for by Congress and sculpted by William Wetmore Story. President Rutherford B. Hayes attended the dedication while famed composure John Phillips Sousa led the Marine band in its first playing of “The Transit of Venus March.” A relief of an electromagnet is on the side of the base.

Henry died in 1878 and is buried in Oak Hill Cemetery in Washington.