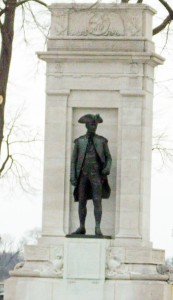 One of the feistiest American admirals of all time has been marooned on a traffic island.

John Paul Jones is on a spit of land at the intersection of 17th St. and Independence Ave. SW just a few yards from the National World War II Memorial. But, it’s a traffic blockade and a little dicey to walk up to (hence my crummy photo.)

Jones is best remembered for his reply to a British commander asking him to surrender during the Battle of Flamborough Head during the Revolutionary War. “I have not yet begun to fight,” Jones replied despite on the worse of the battle to that point. The sailors rallied to win the engagement and Jones became America’s first naval hero and the only naval officer during the war to receive the Congressional Gold Medal.

The father of the U.S. Navy is simply shoved aside after first appearing in Potomac Park in 1912. The 10-foot bronze statue stands amongst a 15-foot marble pylon. Water flows from the mouths of dolphins on both sides into a small pool. The bas-relief has Jones raising the U.S. flag on his ship, the Bonhomme Richard. It was the first time a U.S. flag was raised on an American warship.