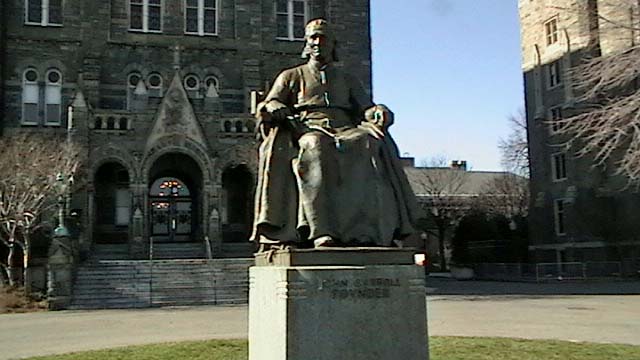 Bishop John Carroll grew up in Upper Marlboro, Md., educated in Europe and returned to become the leader of American Catholics and establish Georgetown University.

Why do students put toilet seats under the bronze statue on campus and place jack-o-lanters atop his head? Kid these days. Well, actually, the pranks have been ongoing since the statue’s 1912 dedication on the center of campus at 37th and O Sts. N.W.

What’s next — taking the hands off the tower clock?

The six-foot statue of Carroll seats atop a marble base was sculpted by Jerome Connor. Ironically, it wasn’t ready for the official dedication so a plaster cast was painted brown to fool everyone. Weeks later, the real one was swapped under the cover of darkness.