If I were king of the forrrrrrest

They are the coolest cats in Washington. The Canova Lions on the steps of the Corcoran Galley on 17th and E Sts. N.W.

The gigantic bronze lions with fabulous manes and cuddly paws make you want to touch them. They seem friendly enough even though the one on the left looks like he could eat you. 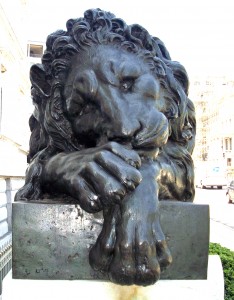 According to Washington Sculpture by James Goode, the greatest book ever about Washington monuments, statues and memorials, the Canova Lions were purchased in 1860 in Rome by Washington businessman Benjamin Holliday for $6,000. Holliday kept them at his home.

The lions were made from the molds of a marble sculpture by Italian sculptor Antonio Canova in 1792 for Pope Clement XIII. The lions are now inside St. Peter’s Basillica in Rome.