The Italian-style church was established in 1913 to serve the more than 3,000 Italians in this “Little Italy” neighborhood who came here to help build the nation’s capital as stone carvers, masons and other trades.

Inside is a traditional Italian venue. A large oil painting on the ceiling behind the main altar of the Blessed Virgin Mary by Roman artist Romano Fattorini dominates the interior. There is a marble pulpit, stained glass windows and mosaic stations of the cross that are little jewels of art and devotion.

The neighborhood began giving way to federal government buildings in the late 1940s, but many of Holy Rosary’s parishioners are second and third generation and still travel to the church regularly. Indeed, Holy Rosary remains the heart of the Italian community with the feast of the Holy Rosary considered an annual holiday complete with a parade and more food than anyone can eat. The church still offers services in Italian and English every Sunday and afterwards espressos and cappuccinos. This church site opened in 1942.

James Cardinal Gibbons was the Archbishop of Baltimore decreed Holy Rosary Church as a shrine for Italian-American Catholics in 1913.

The bell tower has five bells, each dedicated to a different patron. They are the Blessed Virgin Mary under the title Queen of the Most Holy Rosary, Saint Joseph, Saint Anthony of Padua, Saint Gabriel and Saint Rita.

The church raised the money for the bells in 1943, but because of a scrap metal shortage caused by World War II they needed to wait until afterwards in 1946. The bells were cast by the McShane Bell Foundry in Baltimore.

The statue of Christopher Columbus is made from Carrera marble, which is pure white and was used by ancient Greeks and Romans for their statues. It comes from Carrera, Italy. It’s located here in the Holy Rosary Church because Columbus was Italian and this is an Italian church. In 1992, for the 500th anniversary, the Lido Civic Club donated this Carerra marble statue of Columbus.

The plaques on the base are dedicated to church leaders. Rev. Nicholas DeCarlo was the founder and pastor of Holy Rosary Church from 1913-60. John B. Scalabrini was the Bishop and founder of the Missionaries of St. Charles, who since 1960 have led the Holy Rosary community.

Father Caesar wanted something to represent Italian achievements over the ages and chose four subjects – the written word, music, science and plastic arts. Here are four men who represent each subject.

Church leaders wanted a marble façade and discovered only Venetian stone or Carrera marble could withstand Washington’s weather. It’s pure white marble just like the Christopher Columbus statue we saw in the court yard that comes from Carrera, Italy and was used by the ancient Romans and Greeks for their statues. The statues were unveiled in 1989.

Giuseppe Fortunino Francesco Verdi was an Italian Romantic composer from 1813-1901. He wrote mostly operas. You know many of them today, but unfortunately I can’t sing you any. But, you know one that Bugs Bunny often sang, “Bah, Bah, Bah Boomdeeay” from Verdi’s greatest opera – Rigoletto.

Michelangelo di Lodovico Buonarroti Simoni was an Italian Renaissance painter, sculptor, architect, poet, and engineer from 1475-1564. His better known works are the statue of David and the Last Judgment which is part of the Sistine Chapel. Michelangelo painted the Sistine Chapel only because the Pope sent guards to make him do so. 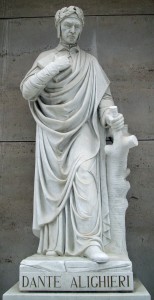 Dante Alighieri was an Italian poet from 1265 –1321. Called the Father of the Italian language, he’s best known for the Divine Comedy that chronicles his journey through Hell. It’s considered the finest literary work in Italian and still read 800 years later.

Guglielmo Marconi was an Italian inventor from 1874-1937, best known for developing the radio, though the U.S. Supreme Court later gave the American patent to William Henry Ward. Marconi received the 1909 Noble Prize in Physics.