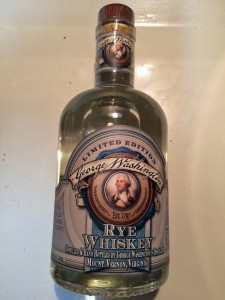 (Reprinting one of our favorites)

After beating the British and serving two terms as our president that included putting down the Whiskey Rebellion, George Washington retired to his home Mount Vernon — to make whiskey.

In fact, Washington was the nation’s biggest whiskey maker the last couple years before dying in 1799. Washington made 11,000 gallons , earning 50 cents per gallon.

In recent years, Mount Vernon created Washington’s still and using George’s recipe makes three batches annually of several hundred bottles. They’re not easy to get. They’re not sold on the internet so people arrive two hours early to wait for the rare sales that go quickly.

Luckily, I have a friend that can buy it for me and settle up later. I got the small bottle of whiskey ($99) and poured three glasses for my two sons-in-law and I.

I’d like to say it went down smooth, but I’m not much of a hard liquor drinker. Mostly, it seemed awfully dry. Still, the bottle is in my china cabinet for rare events. After all, it’s pretty cool.