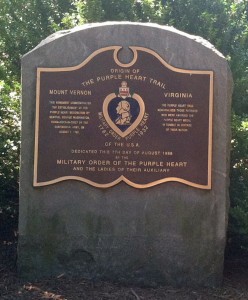 There’s a marker just a few yards left to the entrance into Mount Vernon that is often overlooked but a pretty cool remembrance of history.

George Washington wasn’t allowed by the Continental Congress to promote Revolutionary War soldiers based on merit. But, Washington found a way around it, establishing the Badge of Military Merit on Aug. 7, 1782.

According to The Purple Heart “… The General ever desirous to cherish virtuous ambition in his soldiers, as well as to foster and encourage every species of Military merit directs whenever any singularly meritorious action is performed, the author of it shall be permitted to wear on his facings, over his left breast, the figure of a heart in purple cloth or silk edged with narrow lace or binding.”

The award was discontinued after the war, but Gen. John “Blackjack” Pershing created the Purple Heart in 1932 in General Order No. 3 to honor the bicentennial of Washington’s birth.