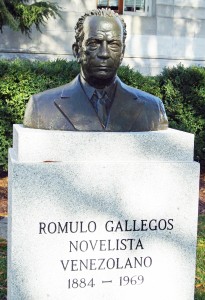 It’s not often writers become elected officials. I sure wouldn’t want to be president because writing’s a lot easier.

But Rómulo Ángel del Monte Carmelo Gallegos Freire (1884–1969) was a Venezuelan novelist who rose to the nation’s presidency in 1948 if only for nine months.

A schoolteacher and writer, he rose to fame in 1929 after his novel “Dona Barbara” criticizing dictator Juan Vincente Gomez forced him to flee the country. He wrote “Cantaclaro” and Canaima from Spain before returning to Venezuela to serve as Minister of Public Education.

After serving in Congress, Gallegos became the first “cleanly-elected” president of Venezuela. However, he was deposed by a coup after nine months and fled to Cuba and Mexico for nine years until returning in 1958. Gallegos then became “Senator for life” from 1961 until his death in 1969.

A bronze bust of Gallegos lies among the outdoor sculptures at the Organization of American States along Constitution Ave. and 18th St. N.W.

Rick Snider is a native Washingtonian, long-time journalist and licensed tour guide since 2010.
View all posts by Rick →
This entry was posted in Monuments and Statues and tagged bust, OAS, Photo by Rick Snider, Romulo Gallegos, Venezuela president, Washington D.C.. Bookmark the permalink.