Kelly reports in ‘First’ D.C. firefighter to die on the job wasn’t the Benjamin Greenup Monument in Glenwood Cemetery long thought to honor the first fallen Washington firefighter indeed doesn’t. Instead, Kelly writes John A. Anderson died two months earlier in 1856. Mostly, it comes down to Greenup came from a wealthier part of town and his colleagues were better able to honor him so over time people assumed Greenup died first.

Hey, it’s not the first time the rich wrote history. 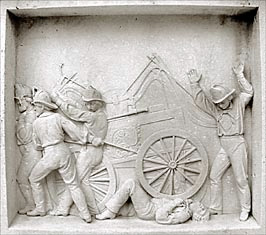 This monument gets some notoriety for its depiction of Greenup’s death. In a three-foot relief panel, Greenup is shown being crushed under the horse-drawn fire engine of Columbia Engine Co. No. 1. Seems Greenup fell under the engine while rushing to the fire and was killed instantly. Amazingly, this very pumper is still in storage for future display.

Firemen were in a hurry not just to save buildings, but to collect a bonus from insurance companies back then. Fights would even erupt between companies over who would fight the fire so Greenup and company were in a big hurry that day.

Fire recruits ride by Greenup’s monument in Glenwood regularly in tribute. Oddly, I wonder if they’ll now need to say he was the second one killed. Anderson is now buried in an unmarked grace in Oak Hill Cemetery near Georgetown.