Flashback: Finding my own monumental tree 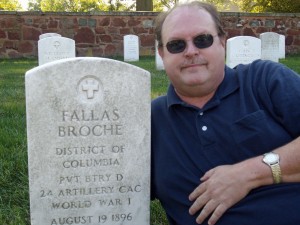 I have a family member buried in Arlington National Cemetery.

I never knew him. Never knew of him until researching my family tree.

But, Fallas Broche, my maternal grandfather’s brother, is among the 330,000 buried in Arlington. About as far back as possible, a few rows from the stone wall bordering Fort Myer. It was a very long walk on a hot summer day, but I found him.

Fallas wasn’t a war hero. In fact, he was in his fourth week of boot camp when World War I ended. Two weeks later, Fallas was mustered out. Guess they didn’t need him so Fallas’ military career was a grand six weeks as part of the 24th artillery CAC, Battery D as a private. And no, it wasn’t a dishonorable discharge because I checked and he wouldn’t have been buried in Arlington.

The rules were certainly less restrictive when Fallas died in 1946 at age 50. Today he wouldn’t be interned there. But, it’s always an honor to know that one of my family rests with so many brave men and women.