Well, Thanksgiving’s over and so is tour season. Aside a tour here and there, most guides are spending the next two months sitting by the fire and glad to escape winter’s cold.

Strangely, the season ended with a flourish –five tours in 10 days. Folks from London to Atlanta to Boston to I can’t remember. It felt like springtime.

But along the way a couple unique experiences showed there’s always something new ahead. 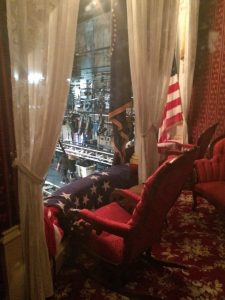 The first was at Ford’s Theatre where I’ve been hundreds of times given I specialize in Lincoln assassination tours. The theater was closed as they readied for a new play, but we could go to the balcony. The ranger mentioned the Lincoln box was open. Took me a half second to head over to the room that’s normally sealed. Finally, a chance for an up close look at where Lincoln was shot. I’ve heard of the door being opened, but never saw it until now.

My tourists seemed only slight impressed. I was the one walking away with a big grin. Hey, works for me. 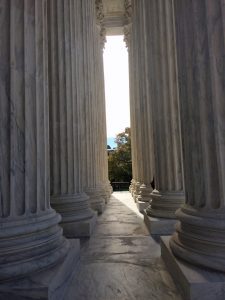 The second came at the Supreme Court. After seeing the chamber, I noticed people exiting across the hallway onto the second-story balcony above the tall steps in the building’s front. Again, a half second later, I was there taking in the view. Maybe this happens more often, but it was my first time in eight years of guiding.

It just shows an old dog does find a new bone now and then.