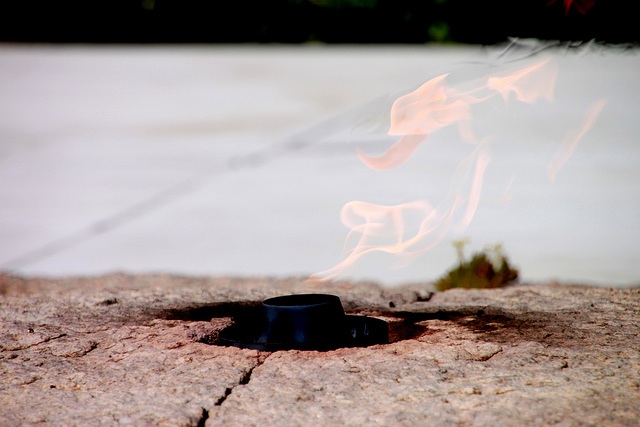 But it’s something nearly everyone who visits Arlington National Cemetery seems to see. At 52, I’m too young to remember the president’s assassination (though I remember my parents attending the funeral) so the generation that remembers Camelot is fading away. But along with the changing of the guard at the Tomb of the Unknowns, the eternal flame is something everyone wants to experience.

Ironically, this isn’t the original flame that was built in 30 hours after a request by First Lady Jackie Kennedy, who was inspired by one at the Tomb of the Unknown Soldier at the Arc de Triomphe in Paris. (Some say it was inspired by the 1960 musical Camelot that the Kennedys enjoyed.)

The original 1963 grave was relocated to its present site about 20 feet away. The new site that now includes Jackie Kennedy and two of their children was completed March 15, 1967.

The original flame equipment was replaced. Natural gas fuels the flame. It has been extinguished over the years, including by a group of Catholic school children sprinkling holy water on it in 1963. A 1967 heavy rain also put it out, but the flame was quickly relit each time.