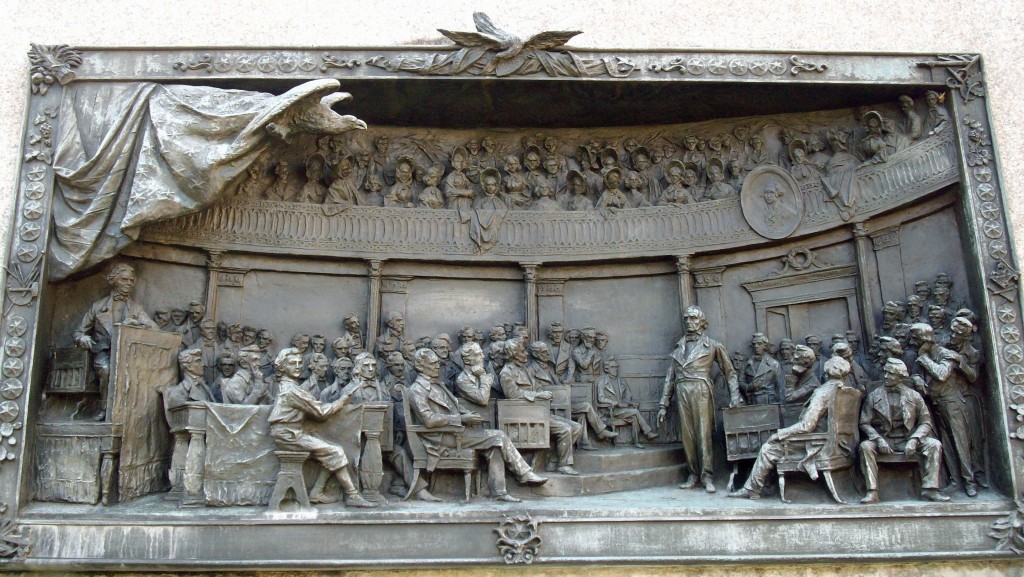 Normally, the high relief art complements the statue, but the two beneath the statue of Daniel Webster are the coolest ones I’ve seen around town.

They are nearly lifelike, showing none of their 110 years. The scene in the front is of Webster, a congressman from New Hampshire and senator from Massachusetts from 1823-41 and 1845-50, responding to South Carolina Sen. Robert Young Hayne before their brethren over the legality of the South’s succession from the Union. Nearly 100 people are shown in the scene that looks like you’re peering into the actual event. 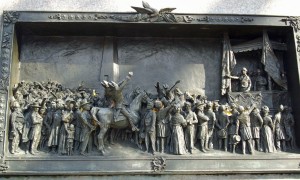 The rear panel is Webster speaking at the dedication of the Bunker Hill Memorial in 1843. Webster is shown reaching out to the crowd amid a flag background. The panel includes a popular quotation from Webster at the dedication where he said, “Our country, our whole country and nothing like our country.” Not Patrick Henry’s “Give me liberty or give me death” but it works. 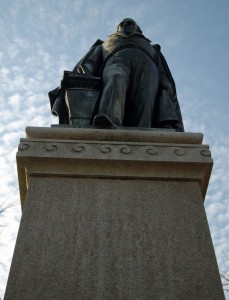 Don’t overlook the 12-foot bronze statue of Webster, whose hawish stare makes him someone you wouldn’t want to spar. Atop an 18-foot pedestal, Webster is holding a reference book. Oh, maybe Webster’s Dictionary?

The conservative Whig was considered one of the great orators even in the time of Abraham Lincoln. He was a fierce protector of federal rights versus state’s rights in the time of the Civil War. The two-time Secretary of State settled the border dispute between Maine and Canada. Webster was voted one of the top five senators in 1957.