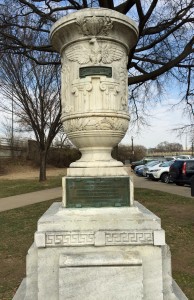 Now that the U.S. has restored relations with Cuba after a half century of the Cold War, the Cuban Friendship Urn reminds us of a time when we were friends.

Actually, U.S.-Cuban relations are a little complicated. The USS Maine blew up in Havana’s harbor on Feb. 15, 1898 and each side blamed the other. It led to the Spanish-American War that last 3 1/2 months — rivaling the War of 1812 as forgotten wars taught on a snow day in eighth grade U.S. history classes. You know, Teddy Roosevelt, the Rough Riders, San Juan Hill? The U.S. ended up gaining Guantanamo Bay that’s still an American base plus current territories Puerto Rico and Guam. We also bought the Philippines from Spain for $20 million as part of the deal.

Anyway, Havana created the USS Maine memorial dedicated to the 266 U.S. sailors that perished that day. The memorial was destroyed in 1926 by a hurricane and among the remains was the urn, which was given to U.S. president Calvin Coolidge in 1928. 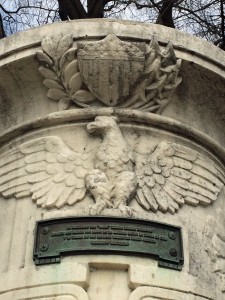 The eight-foot, four-ton urn depicts the mast of the Maine with a message in Spanish saying the two countries would remain friends. It was first placed in Potomac Park before removed while the 14th St. Bridge was built in the 1940s. The urn stayed in storage until 2011 when the National Park Service placed it by the Potomac River in East Potomac Park in a little public parking lot few know almost underneath the 14th St. Bridge. (That parking lot is great for walking to the Jefferson Memorial.)

The U.S. and Cuba haven’t been friends in more than a half century, but one day I’ll be drinking rum in Havana and telling locals that Washington has an urn that says we’re friends.