(Reprinted from my former blog – TheRickSniderReport.com on Jan. 9, 2011)

The new Wilson Bridge was the best billion dollars ever spent in my opinion. I smile every time I drive over it with no backup at all during rush hour. It’s just a joy after a generation of hour-long backups. 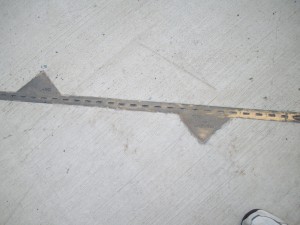 I’ve seen joggers and bikers on the trail of the inner loop side since its 2008 opening and said, “I’ve gotta do that.” And like most people, I didn’t.

But I did it last year when the weather was cool, perfect for a three-mile walk. My high school buddy Anthony Lee came with me.

Here’s the key for anyone who wants to trim a long walk – start on the Alexandria side. You’ll hear everyone talk about National Harbor on the Maryland side, but it’s a long, long ways from the bridge and you have to pay a king’s ransom to park.

(Click to keep going because lots of photos ahead)

No one could tell me where to get on the bridge trail from Virginia, like it was state secret or something. So naturally I had to find it, fortunately with the help of a nice person from Wilson Bridge public affairs

Here’s the secret to get on the Wilson Bridge from Alexandria:

1. Take the very, and I mean very first exit after the bridge that says Mt. Vernon, not Rt. 1 North. It dumps you onto Church St. Find a place to park there and walk up to Washington St. Cross at light, and it’s 30 seconds on your left. Essentially, next to the Wilson Towers.

From Alexandria:
1. Follow Washington St., head south towards Mt. Vernon. Turn right on Church St. and park. Don’t park at Wilson Towers or other developments or you’ll be towed.

OK, now that we’ve cracked the code, there’s a really nice entranceway onto the path. The whole thing really is beautiful.

The first section is uphill against the wall. A retired police officer who once worked in Alexandria, Anthony regaled me with stories of the old bridge where let’s say people enjoyed themselves in different ways, fled from the cops or fished from ledges they built under the bridge.

You’ll pass the St. Mary’s Catholic Church cemetery that you’ve seen while driving across the bridge. Did you know no one living in Virginia can be buried there? Yeah, seems you’re not allowed to bury live people. (Loved that joke since a bus driver told me it when I was 12.)

You’ll pass the sound barriers that really do block traffic noise. I thought it was some deterrent against jumpers, but they’d have to jump from the pedestrian path anyway. Notice the wires in the corners. Anthony says they’re to protect the bridge from lightning.

Which brings me to an Anthony’s rules:

OK, 1.1 miles into the walk you’ll see the first lookout area that’s essentially the Virginia border. Quick history lesson: most rivers dividing states are split in the middle. But, for some reason George Washington – yes, that George Washington – gave Maryland the river up to the Virginia shore line so it’s ours (I’m a native Washingtonian, but a long-time Southern Marylander.) The first lookout describes how Maryland, Virginia and the District share the bridge.

Anthony looks like he’s gonna go over the edge.

Man, what’s happening to my hair (or what’s left of my hair.) We hit a serious wind over the water.

OK, we continued on another half mile to the midpoint. Great view of the river into town.
Anthony was amazed the telescopes were free, but seriously, who’s walking out there to steal quarters? There’s a bench to rest. I have sat on this bridge when the drawbridge was raised on a hot summer night, but never on a nice bench.

OK, now the hard part – heading back. I see the sign saying 20 miles to the Dulles Toll Road where I get off to head to Redskins Park. Hardest 20 miles around town.

It’s noon as we finish, my blood sugar’s crashing because I left my snack on the kitchen table. Anthony suggests an Afghan buffet and I’m too light headed to complain. Actually, it was decent. I liked the fish and bread, and the rest was OK. Not my usual fare, but I actually had two new experiences in one day.

Not a bad day.