Chinese Community Church has something old, something new 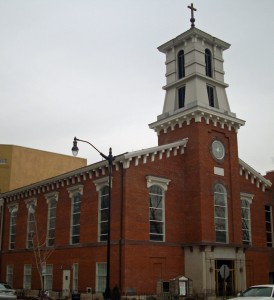 It took modern science to make the Chinese Community Church look like 1852.

Founded by U.S. Capitol architect Thomas Ustick Walter as a Presbyterian church, it was later a Jewish temple and Baptist church before purchased by the Chinese Community Church in 2006.  Located at 500 I St. N.W., the church is only a couple blocks from the modern-day Chinatown.

The formstone, old stone look that wrapped the original brick-and sandstone in the 1950s was removed beginning in 2007. Church leaders wanted to install a steeple since it’s a Christian venue, but the D.C. Historic Preservation Review Board refused permits because it was not part of the original design. The church opted to recreate the original Italianate-style tower, all 88 feet of it, with its five-foot cross.

Working off old photos and with the advice of an architectural historian, Washington architect Darrel Rippeteau designed a close replica. It took seven months to chiseled off the formstone and remove decades-old layers of paint from the brick.

Today, you can attend services in Mandarin, Catonese and English.