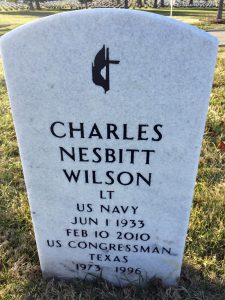 I recently watched “Charlie Wilson’s War,” a 2007 movie starring Tom Hanks on U.S. Congressman Charlie Wilson’s support of Afghan mujahideen during the Soviet–Afghan War in the 1980s. The movie grossed $119 million worldwide, which is a pretty respectable number.

The movie made me look up the real Charlie Wilson. Turns out Charles Nesbitt Wilson (1933-2010) was a pretty impressive fellow. A 12-term Congressman from Texas whose Operation Cyclone was the largest ever CIA covert operation. (At least as far as we know.) The U.S. Naval Academy officer served from 1956-60 as a lieutenant and gunnery officer on a destroyer. He also served at the Pentagon in an intelligence unit.

Wilson is pretty easy to find at Arlington National Cemetery. Turn left when reaching the cemetery’s main street after leaving the visitor’s center. On the left side, it’s the first section, last stone on the right side of a row at Section 54, grave 195.