They hit you right away. Amid the acres of graves, the rows of cenotaphs made me say, “What the . . . “

(And shame on you with dirty minds even if you guessed right.)

Congressional Cemetery has 168 nearly identical cenotaphs remembering or marking the graves of deceased congressmen and senators. Perfect rows of Aquia sandstone just like the White House and U.S. Capitol. 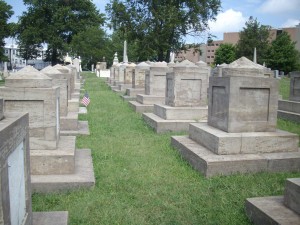 However, some congressmen are buried under a cenotaph while others are elsewhere in the cemetery like James Gillespie. There’s a cenotaph for every congressman who died in office from 1833-76 beginning with James Lent.

Cenotaphs were no longer used in 1876 when Massachusetts Sen. Geporge Hoar said, “the thought of being buried beneath one of those atrocities brought new terror to death.”