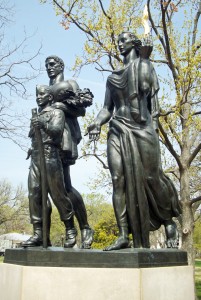 The Boy Scout represents the aspirations of all past, present, and future Scouts throughout the world. He carries a staff that has been taken from the male figure’s branch of peace. The scout wears the traditional uniform of the group complete with kerchief around his neck.

The bronze monument with a granite base has three figures. They represent the boy scout in the middle with an adult male and female behind him.

The male figure is a classic ancient statue that’s nearly unclothed but through his strong figure represented physical fitness. In his right hand is also the branch of peace.

The female figure holds a large yellow figure that is the eternal flame of God’s Holy spirit.

Notice both adults have outstretched hands behind the boy, as if to push him into the future. All three also have their right foot forward as walking in unison towards the future.

On the side of the monument on the Ellipse near 15th St. and Constitution Ave. N.W. also bears the boy scouts credo to do one’s duty to God and country.

The pool next to the 12-foot statue honors the scouts. It’s made of granite, concrete and marble and is 17-feet wide and 18-inches deep. Around the pool are the basic goals of citizenship used by scouts.

The Boy Scouts Memorial marks the spot of the first scout jamboree in 1937. The scouts still gather for a week-long jamboree gathering attended by thousands nationwide, but it’s now held about one hour away in Virginia.

It was created by American sculptor Donald De Lue in 1963 and paid for by scouts nationwide.