One of my tour companies picks up regularly at the Old Post Office Pavilion so I see the eight-foot marble statue of Ben Franklin quite often. I thought it was to honor him as the nation’s first postmaster general given the OPO was once the postal service’s national headquarters.

Turns out the statue honors Franklin as a journalist, not bureaucrat.

Stilson Hutchins donated the statue (nothing like adding your name to the base) after his two nearby newspapers (including the Washington Post) were sold to nullify Ben’s intended location across the street. 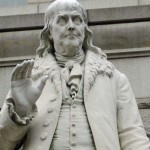 Hutchins was remembering Franklin as one of the nation’s leading journalists in Colonial times. You know, Poor Richard’s Almanac.

Franklin is shown in diplomatic dress from his days as ambassador to France. I know Franklin’s hair was lacking, but this statue makes him look like a bald mess. The statue was unveiled in 1889 by a Franklin descendant.