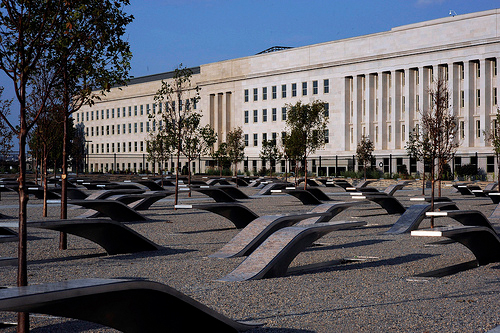 Washington is the seventh most photographed city in the world, but some buildings and inside exhibits are barred.

The most prominent no-no is the Pentagon because it is a military installation. There are big signs on the perimeter that say no photos and they mean it. Occasionally, I’ll walk a group through the tunnel under I-395 into the parking lot on the way to the 9/11 memorial and someone will take a photo of the building. Moments later, a security vehicle will come by and tell people to stop. I’ve never seen security confiscate anything. Tourists aren’t spies and the police know it. Besides, someone with a long lens could photograph the Pentagon from the highway.

If visiting the 9/11 memorial, you can take photos of it like the one above and the building can be in the background.

On the National Mall, the only prohibition is no tripods because someone could trip in the heavy crowds. But, in less busy times you can usually use them for a brief photo. Just don’t take all day. And, don’t set up under Lincoln’s statue because the National Park rangers will stop you. No tripods by the White House, either.

Mostly, public buildings around town are made for photography. It’s the insides that includes some restrictions. The White House tour only allows cell phone photos, not for security reasons but because they want to keep the line moving.

The House, Senate and Supreme Court chambers and Library of Congress reading room prohibit photography. There are some art exhibits around town that also bar photos to avoid diminishing the old art. Also, no photos of George Washington’s false teeth at Mount Vernon.

Sometimes a guard comes out to the sidewalk to tell you no photos. Seems like every six months this comes up, probably because of new guards, and the police chief sends out a notice that photos are allowed in public areas. If it happens to you, chalk it up as bad luck and let it go. Arguing with security is never a good idea. I shudder to think what could happen.

Anyway, take all the photos you want. Even better, come on our photo tours and we’ll show you the good spots.