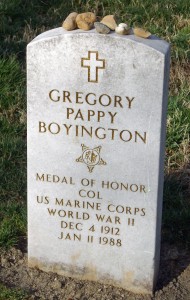 You know who Gregory “Pappy” Boyington was even if you weren’t alive during World War II.

The popular 1970s TV show “Black Sheep Squadron” remembered the Marine pilot who shot down 28 enemy planes before down himself and spending the final two years of the war in a prisoner of war camp.

Boyington spent five years in the Marines before resigning in 1941 to join the Flying Tigers in China as an American volunteer unit. He rejoined U.S. forces after the bombing of Pearl Harbor and led a unit of replacement pilots known as the Black Sheep. Boyington was then 30-years old, a decade older than his pilots who dubbed him “Pappy.”

Discovered in a POW camp after the war, Boyington received the Medal of Honor from President Harry Truman before retiring in 1947 as a colonel. He was later married four times with one of his three children becoming a pilot during the Vietnam War.

Boyington is buried in Arlington National Cemetery’s section 7A just a few stones to the left of boxer Joe Louis’ large marker.