All aboard for Randolph 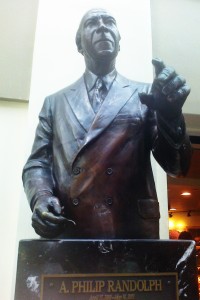 If you’ve ever taken a train at Union Station, you’ve passed this statue. It’s right by the entrance to the boarding area.

A. Philip Randolph was among America’s leading black labor and civil rights leaders. The plaque beneath the bust says Randolph founded the brotherhood of sleeping car porters (hence the railroad station connection) and “conceived and initiated the 1963 march on Washington.”

Randolph first organized shipyard and dock workers before moving on to porters in 1937. His first porters contract included a $2 million raise, shorter hours and overtime pay.

Randolph moved on to discrimination in 1942. His work led to the 1963 civil rights rally where Randolph witnessed Martin Luther King Jr.’s “I Had a Dream Speech.” Ironically, the son of an Episcopal minister was an atheist.

The statue was created by Ed Dwight, a former astronaut turned sculptor.

Rick Snider is a native Washingtonian, long-time journalist and licensed tour guide since 2010.
View all posts by Rick →
This entry was posted in Monuments and Statues and tagged A. Philip Randolph, bust, Photo by Rick Snider, Sculptor Ed Dwight, Union Station. Bookmark the permalink.