Albert Gallatin – the man in front of the Treasury 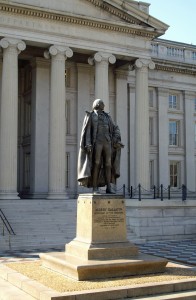 After taking their zillion photos of the north side of the White House, many tourists walk to 15th St. to catch their bus. They pass the Treasury Building along the way and always ask who’s the statue.

When I say Albert Gallatin, the response is usually a blank stare. And, I really can’t blame them.

Created by James Earle Fraser, the bronze statue was erected in 1947. The inscription on the base tells his story:

Gallatin was the fourth and longest-running Treasury Secretary who later founded what’s now NYU college. A young orphan of rich parents, the Swiss-born Gallatin arrived in the U.S. at age 19. Gallatin endured mixed success as a businessman before entering politics. He was a pretty good Treasury Secretary, overseeing the Louisiana Purchase for $15 million and financing the War of 1812 with Britain. However, the national debt grew under his stewardship.