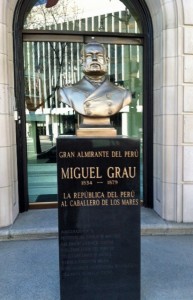 Entering the Peruvian embassy on 17th and Pennsylvania Ave. NW means getting by Miguel Grau first.

The magnificent bust of the country’s person of the past millennium dominates the doorway. There wasn’t room to put it elsewhere and what the heck – he was a big deal.

The marble base says “Gran Almirante” (Great admiral) and “Al Caballero de los mares” (To the Horseman of the seas) for the man who led the Peruvian Navy until 1879 when killed at naval Battle of Angamos by an armored-piercing shell during a war with Chile. In fact, there wasn’t much left of Grau, who is now interred in El Callao, Peru. He was called “The Gentleman of the Seas” for his compassion during battle with Chile while holding off the opposing invasion for six months through his stealth attacks on opposing ships.

The Peruvian embassy and chancery was built in 1910 as a private residence designed in Italian classicism. The Australian government sold it to Peru in 1973.

Rick Snider is a native Washingtonian, long-time journalist and licensed tour guide since 2010.
View all posts by Rick →
This entry was posted in Monuments and Statues and tagged embassy, Miguel Grau, Peru, Photo by Rick Snider, statue, Washington D.C.. Bookmark the permalink.