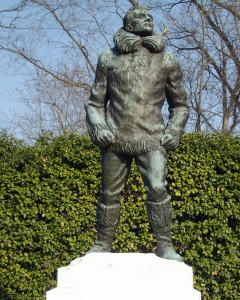 He was the first man to fly over both the North Pole (1926) and the South Pole three years later. His expeditions, including five to Antarctica, mapped several hundreds of thousands of miles beginning in 1928. The man spent five months living in an ice shack. We’re talking Congressional Medal of Honor and Legion of Merit recipient.

Wow — now there was the world’s most interesting man.

This eight-foot bronze statue on Memorial Drive near the entrance to Arlington National Cemetery was erected by the National Geographic Society on Nov. 13, 1961. Sculptor Felix Weldon, who produced the nearby Marine Corps War Memorial (Iwo Jima) does a tremendous job of showing Byrd in Arctic gear looking like someone fighting his way through hostile weather. You feel cold just looking at it, which comes in handy when returning from the cemetery on a hot summer day.