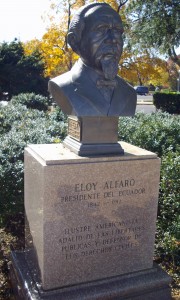 A leader in the Liberal Revolution of 1895, “Viejo Luchador” (Old Warrior) created national unity, secured its borders and brought new transportation and communication systems to the Central American country.

Unfortunately, Alfaro was eventually forced from office and exiled to Panama. After attempting another coup, he was jailed. A mob later dragged Alfaro from jail through the streets until dead.

The bronze bust is part of the Organization of American States outdoor sculptures at Constitution Ave. and 18th St. N.W.