A Great Time Around Britain in Eight Days 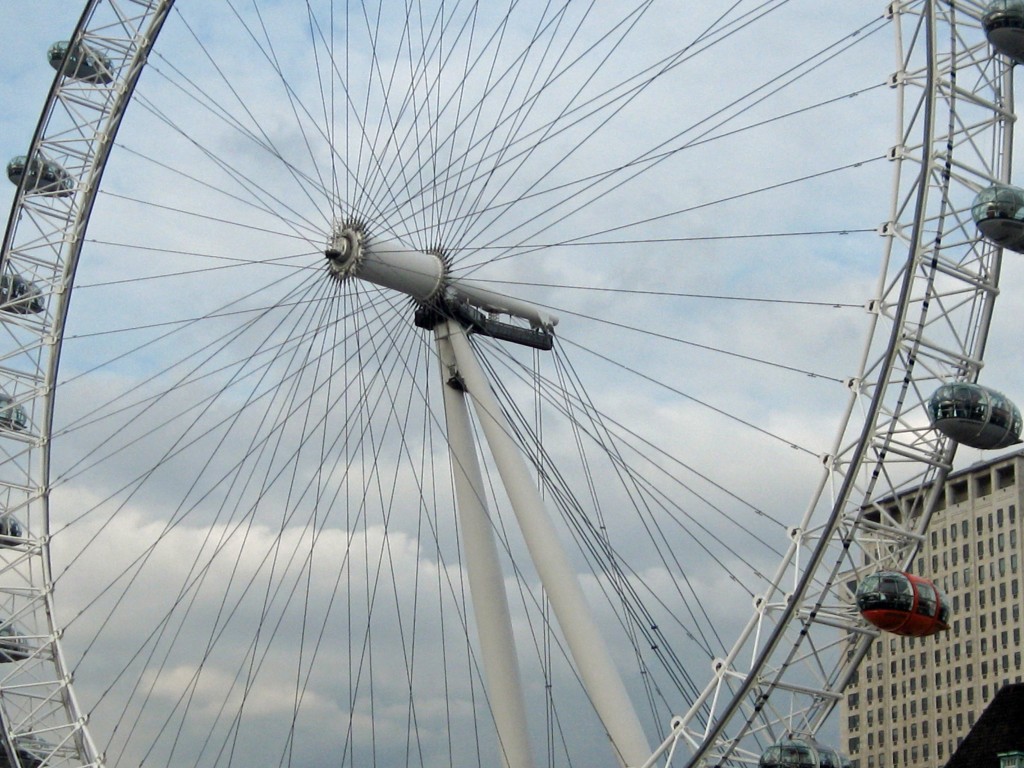 Sometimes I play tourist myself and for the first since becoming a guide I went on someone else’s trip – Trafalgar’s Great Britain-Ireland tour.

Eight days – nearly 2,000 miles on a bus plus two ferries, lake boat ride, train ride and lots of walking. If nothing else, I learned I’ll stay a day guide around town than hauling 51 people around 5 countries in a week.

People ask me how it was. Seriously, it was so awesome and overwhelming that two days after returning I’m still having trouble processing all the great things I saw. I’ve decided to just write a series of random thoughts, which should be a little more entertaining. 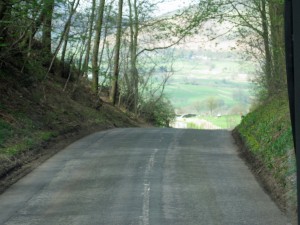 Scotland was my favorite country, followed by Wales, England and Ireland-Northern Ireland. The latter two are separate political countries, but largely you can lump them together as a tourist. Essentially, we saw Belfast and then drove across the border to Ireland.

Ireland at the bottom of the list? Yeah, surprised me, too. Not that there was anything wrong with the country. The people were great, the single best moment came there and I even learned there’s a pale version of Guinness that I loved. But as far as lush scenery or old charm, it wasn’t comparable.

Edinburgh was my favorite stop (but to be fair I’ve been to London before and it was technically just the meeting place for the tour.) Great mix of modern and medieval sites in the city. Castle atop a volcanic rock is just amazing. 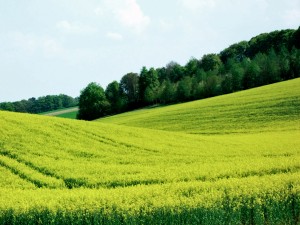 The fields of grapeseed in the countryside are amazing. Just endless yellow. I’d never seen anything like it before. They make canola oil from it.

The Tube in London is awesome. It carries 2 million people into central London daily. Trains come seemingly every few minutes. We took it everywhere. The one downside is changing trains seems to mean a five-minute walk to another platform with plenty of turns and stairs.

None of these countries have wash cloths. What’s that about? You have towels – just cut them into smaller pieces. 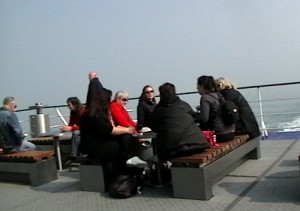 Taking the ferry from Scotland to Belfast was awesome. Not crowded, perfect weather – couldn’t ask for a better experience. But the ferry from southern Ireland to Wales was crowded as hell with kids running everywhere and locals throwing their bags on extra seats. Guess Americans aren’t the only rude people on Earth.

There’s a Lady Diana “fountain” in London’s Hyde Park that is beyond weird. It’s a big circular trench with water running around it. And, it’s not where the map says it is so we walked about a mile off course. Walked six miles in a few hours that day. 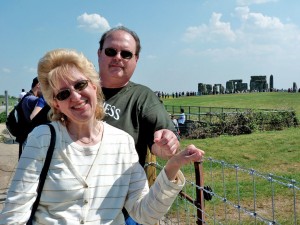 Tour guide Steve said we’d stop 30 minutes for Stonehenge. I thought that was crazy short. Turned out he was right. There’s a fence around it and something like a $30 admission charge, but you can stand outside the outer fence and get a decent photo. It’s in the middle of nowhere. I know it’s impressive they built this thing, but overall, it’s a five-minute look and you’re on the road again.

The food was excellent despite remarks of British cooking’s not very good. The one exception – they can’t make pizza worth a damn.

Oh, and that part about you can’t get cold drinks is flat out wrong. Sometimes you needed to ask for ice and iced tea isn’t everywhere, but I never drank my Diet Coke warm. As for the beer, it was cold to me. 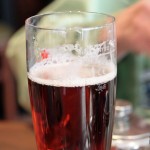 They make a pale version of Guinness. It’s excellent. I’m not a big fan of dark ales, but I’m already wondering if I can get this pale version in the U.S.

I learned from locals that the movies “Braveheart” and “Rob Roy” that I loved and formed my expectations of Scotland are essentially Hollywood crap. A touch of truth to both, but that’s largely all. How disappointing.

Within 30 minutes while dining at the site of the battle of Battle of Bannockburn in 1314 where Scotland gained it’s independence, I enjoyed pate, haggis and Scottish whisky for the first time. I’m still not sure what haggis is, but it tasted like sausage. Then again, whisky deadens taste buds.

The Brits aren’t as excited over the royal wedding as some Americans. Lots of media there, though. Saw five camera crews interviewing people outside Buckingham Palace the other day. 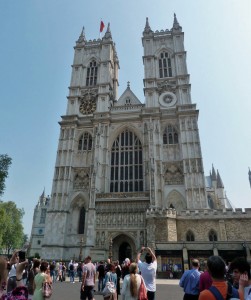 We attended Easter mass at Westminster Abbey where the wedding is Friday and there’s a gate in the middle of the church to keep commoners back. A gate – in church! And after the church ceremony, they closed the gate so those of us in the back couldn’t even see the alter area. That’s harsh. They did give out Easter candy when leaving, though. Guess they can buy us off with chocolate. Normally, that works for me, but not this time.

Thermostats are largely decorative. Only found one that worked. Good part was you could open windows in many hotel rooms.

Sometimes the best things are hidden from tourists. There was this bar just outside Waterloo, Ireland called the Saratoga Pub and Restaurant in Woodstown Beach that overlooked the Irish Sea. It was next to a trailer park so it was a neighborhood place with picnic tables, kids and dogs running around and even a small beach with bikini-clad sunbathers. Jackie Kennedy brought the clan there in 1961, according to the newspaper on the wall. Fifty years later, they’re still talking about that.

The bar’s owner Bill Doherty is a native who returned after 30-plus years living on Long Island, New York. He has a great place. We spent a couple hours there listening to a three-man group; drinking the best Guinness in Ireland that was as good as promised. If you’re ever nearby, you have to stop there. 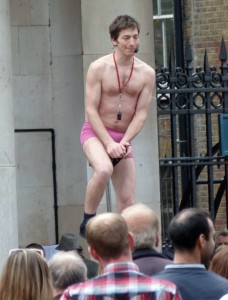 Covent Garden in London is not a garden. It’s a tourist area that was endless fun. They have plenty of very talented street performers throughout the UK.

We met a friend of my daughter Megan’s for lunch. Peppered her with constant questions because it’s great fun interacting with a local.

Stopped by a movie theater just to try their “mixed” popcorn of sweet and salty. Half regular popcorn with salt, half a light version of kettle corn. Problem was they dump one atop the other versus mixing them. Overall, no big deal. 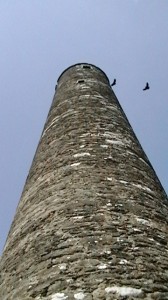 We saw this one remote abbey about one hour from Dublin that included a tower in case of Norman invasion. OK, this was more than 1,000 years ago. No roads or anything. How the heck were Norman soldiers supposed to find these guys? And, why were the Normans so desperate for the monks’ wealth? Where were they going to spend their stolen spoils? Baffling.

While listening to the history of a castle in Cardiff, Wales, I suddenly heard the name of my upteenth great aunt Matilda. Wait, she was a direct ancestor. Do I own part of this place? I’m calling the lawyers.

Belfast was very eye-opening. For the first time ever, I heard a guide discuss the realities of a disturbing thing. Normally, guides are supposed to be all sunshine and rainbows, but the world isn’t Disneyland and I applaud the step-on guide for showing us the truth of the current neighborhood violence between Catholics and Protestants. At the edge of neighborhoods, there were large mural paintings of hooded men pointing guns at you and essentially saying outsiders stay out or die. No messing around with the message. That was sobering, but so fascinating and so sad.

We visited Bath, England for one hour. Megan desperately wanted to visit Jane Austen’s house so we sprinted away from our group to get a 15-minute look. Bath is one happening place. Romans used to wash there. Definitely worth returning to see.

OK, I’ve bored you enough with my cliff notes version of a week on the road. If you ever want to go abroad, I recommend Trafalgar Tours. They do a great job. The only downside is you get up early and keep moving, but I like that anyway.

2 Responses to A Great Time Around Britain in Eight Days