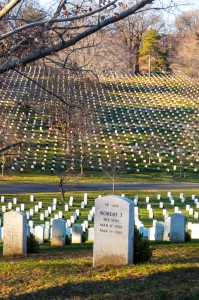 It’s one thing to pass the endless white stones while leading visitors through Arlington National Cemetery. And it’s another to have a long ago family member buried there but never knowing them like my grand uncle.

But this time it was personal. My Aunt Delores and Uncle Charlie Portale were buried at Arlington recently. You can only walk away a little sad but proud.

Like many funerals, they died months ago. There was a joint funeral earlier since they retired to Florida and died only couple months apart. That was the time for real sadness.

But they were finally interred in Arlington’s new columbarium near the parking garage. It proved a simple but tasteful ceremony and an inside look at the process that happens nearly 30 times six days each week.

Family members met at the administrative building, then lined up the cars for the ride to the grave site. Since the couple was cremated, there was no caisson. Under a tent were a few chairs for the brief reading by a chaplain, flag ceremony and 21-gun salute. Then, a family member carried them to the wall, one more prayer and it was done.

It was sad enough to say goodbye to two people I spent so many holidays over a half century. I can’t imagine what it’s like to lose a child, spouse, parent or sibling at a young age in service to our country.

Normally, cemeteries aren’t my favorite places, but as a guide I’ve learned to appreciate their history lessons. And, there’s none better than Arlington.

So eternal rest Aunt Delores and Uncle Charlie. You’re among our nation’s best.