A champion in the ring – Joe Louis 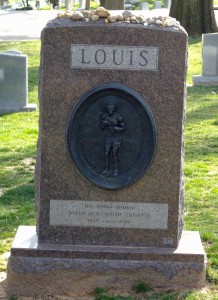 You’re busy trying to make the Changing of the Guard at the Tomb of the Unknowns so you see an interesting grave but don’t stop. Well, stop on the way down the hill at Arlington National Cemetery because if nothing else one of the few water fountains on the grounds that work is nearby.

Joe “The Brown Bomber” Louis is buried at the bottom of the path in Section 7A by the benches and water fountain just below the Tomb of the Unknowns. He was heavyweight champion from 1937-49, including a 1938 victory over Max Schmeling to avenge a loss two years earlier.

Louis joined the U.S. Army in World War II, but didn’t see combat because military leaders feared the propaganda by Germans if the boxer was killed or captured. Instead, Louis raised millions of dollars while fighting for the troops.

Louis died in 1981. The large marker was partially funded by singer Frank Sinatra. Buried next to Louis is famed actor Lee Marvin, the tough colonel in “The Dirty Dozen” movie. “Pappy” Boyington, the World War II ace of the Pacific theater, is nearby.