A 3D map of town at your feet – Freedom Plaza 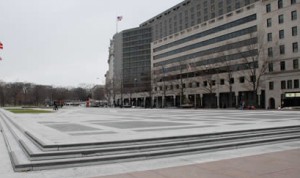 Freedom Plaza may be filled with skateboarding teenagers, lost tourists or protestors, but the Pennsylvania Ave. near 14th St. N.W. median is also a map of town’s original plan.

The L’Enfant Map detailing the 1791 plan by Washington’s first city planner Pierre L’Enfant is at your feet. With the white and black stone, it’s like being on a chess board of sorts as you can see how the streets were to be layed out. Maybe the first version of the Sims City game.

The upper map terrace has a grass lawn where the mall occurs and inlaid bronze plans of the White House and the Capitol located at either end of Pennsylvania Avenue. The inlays illustrate L’Enfant’s intention to have these two buildings balance each other and symbolize two main branches of government.

L’Enfant’s plan of Washington combines two orders of scale. The giant order is the diagonal avenues that sometimes terminate in a building or a monument. This order characterizes the federal scale of the city. The minor order is the rectangular grid pattern of the local structure of the city. There are quotes from famous people about the city carved into the paving stones that surround the L’Enfant Plan.