56 reasons to come to Constitution Gardens

They were sons of liberty, the ones brave enough to put their name to paper and tell King George to go to Hell. America was free.

Today, we remember the founding fathers with 56 Signers Park where each of their signatures is shown in granite. John Adams, Thomas Stone, Ben Franklin and yes, John Hancock’s signature is the biggest. Each of the 56 blocks contain a signature, occupation and hometown. 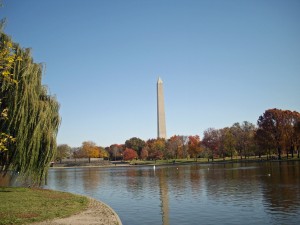 Oddly, there was no remembrance to the men who risked their wealth, health and very necks by signing the Declaration of Independence until July 2, 1984 when the American Revolution Bicentennial Administration created the memorial.

“We sometimes forget the magnitude of their action,” said Virginia Sen. John Warner (Liz Taylor’s last husband) at the dedication, “the courage and moral strength needed to take that first great step.”

The 50-acre lake is just steps from the World War II Memorial on the National Mall. The best access point to the memorial is from 19th St. and Constitution Ave. The entire area was a swamp until the U.S. Army Corps of Engineers dredged it a century ago. For years, it was the site of the Main Navy and Munitions Building where even President Richard Nixon served. Nixon later ordered it destroyed and turned into a park.

Today, it’s a fine oasis in the middle of the mall that many people walk by unnoticed. Surely Hancock would have commanded their attention in his day. And that’s why you should stop by.