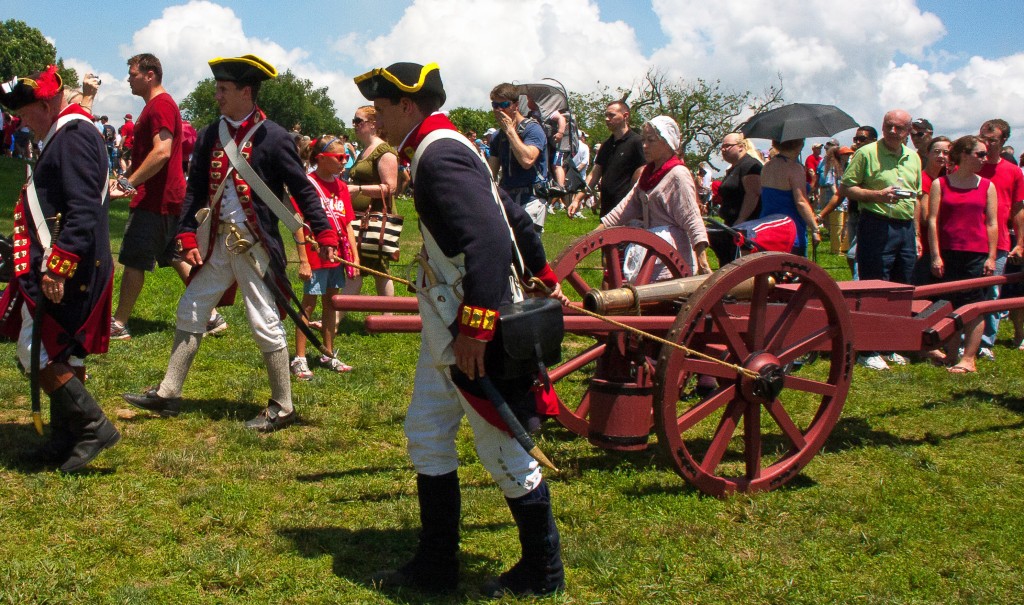 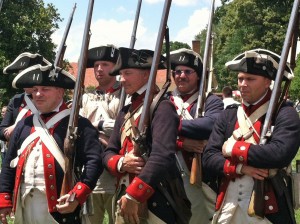 You’ve seen them wearing uniforms of so long ago. Sometimes patriots, sometimes opponents.

After watching the First  Virginia Regiment as part of the Fourth of July festivities at Mount Vernon on a brutally hot afternoon, I wondered how and why they do it. Fortunately, re-enactor Gary O’Brien (in middle of right side photo) took time to tell MonumentalThoughts.com the inside story.

1. OK, the same question you’re asked a million times – why do it?

Basically, out of love for our heritage. For whatever reason, one particular history teacher in college really connected when teaching about the time period and then I stumbled onto The Spirit of Seventy Six by Henry Steele Commager which is full of eye witness accounts of various events that happened. Finding Private Yankee Doodle, the autobiography of J.P. Martin, definitely added fuel to that fire. One thing that becomes clear through reading diaries and eyewitness accounts is the dedication they had. They routinely suffered for lack of clothing, food, equipment and shelter throughout the entire conflict yet they stayed in the fight. Many who went home after their enlistments were up actually came back. Many suffered horribly in the field or at the hands of British captors and did not survive.

That dedication in the face of horrible odds becomes clear. No other nation in history had ever oriented government around the liberty of the individual and the results of that dedication and the opportunities resulting from it are what makes us the most free and benevolent nation to this day and it is up to us to preserve and pass on that legacy. For me, the realization of all of this sort of cast a new light on the hobby of reenacting. After seeing a number of reenactments previously, I thought of trying it just to see what it is like. I have now been doing this 14 years and can tell you without a doubt, the whole experience is getting better. For one thing, being connected with so many others who love our heritage leads to many more fascinating discoveries and certainly enhances my own appreciation for being American..

2. Do you feel a connection to history when wearing the uniform?

Yes and no. Nothing magic automatically happens when you dress out, but on the other hand when your clothing and gear is authentic and you are in formation on the field in battle with all the noise, smoke and yelling of orders all around you, there are definitely situations you get into where the hair on the back of your neck stands up or your heart gets into your throat. We call that an “I get it” moment. Part of the reason we “reenact” is to try to walk in their shoes. The other part is to honor their memory by providing a visual example of how they lived and what they did so that we might preserve our heritage rather than letting it become lost. 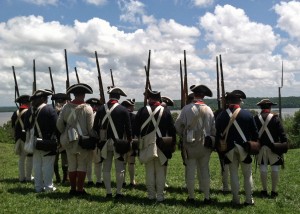 3. How difficult and costly is it to assemble a uniform and gun?

The biggest expense is the musket itself. Brand new they are now around $1,000, but there are used deals to be found. The Yahoo group Revlist is one source for used gear and other information concerning the American War for Independence. The uniform is about half that much considering materials and labor to put it together. Our uniforms are made from patterns of surviving examples using the same materials such as linen and wool. They are in fact uniforms not costumes. Beyond that there are accoutrements such as cartridge boxes, canteens, bayonet and sling etc, so there is a bit of investment to be made, but it can be done over a period of time.  It is not difficult to put everything together as there are skilled individuals out there who can provide tailoring and other services but it does take a little time to get things complete. Most units have loaner gear to help fill in the gaps and get people started.

4. How often do you participate in re-enactments and do you ever wish you could really finish off those red coats?

My unit, the First Virginia Regiment, www.1va.org (https://www.facebook.com/1varegiment ) based in northern Virginia votes on a schedule of events every year as do other units. These events range from local living history events to large scale battle reenactments. Usually there are about one to two living history events every other month then maybe two or three actual battle reenactments in a particular year with one event in particular being the largest for that year. Our biggest event this year is Battle of the Hook on October 18-20 at Gloucester, Va. See www.battleofthehook.org.

You can see pictures from our previous event in 2008 and other information about the upcoming event at www.facebook.com/BattleOfTheHook.

Do I ever wish I could finish off those redcoats? No way. We all may act like we want to kill each other out there and sometimes you do get really pumped up, but at the end of the day we’re all friends and share the same love for our heritage, regardless of which side we portray. 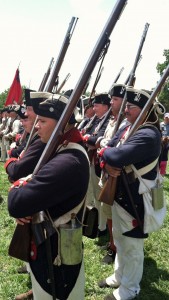 5. How does someone become a re-enactor and choose a unit?

Chances are there is a unit based near where you live. Best thing to do is go to a reenactment and walk around the camps talking to people about where they are from and what it is like to be in their unit. The American forces are generally organized under the Continental Line, http://www.continentalline.org/  The British forces are generally organized under the Brigade of the American Revolution, http://www.brigade.org/  Each of those two links have listings of units by region among other information of interest.

5+. Is there something we missed that we should know?

Being involved in this hobby gives us the opportunities to visit some amazing places that we might not otherwise get to see and we always come away with many lasting memories of those events and places as a result. Sometimes it’s hot, sometimes it’s cold and sometimes it rains, but we always come away with memories we continue to talk about.
With that in mind, anyone having an interest in our history or the hobby itself might consider attending Battle of the Hook, Oct. 18-20 in Gloucester, Va. at Warner Hall. This is the big one for 2013. Over 1,000 reenactors are currently registered. There will be earthwork fortifications and an 18th century farm in the cornfield. British, Loyalist, French, American and German forces will be engaged. Battle scenarios will include cavalry, artillery and opposed historic boat landings. If you have not yet seen a large scale Revolutionary War battle, this is definitely something to see.