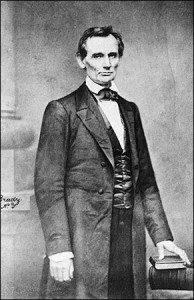 Abraham Lincoln returns to Washington on March 5 for the sesquicentennial celebration of his first inauguration. John T. Elliff of The Lincoln Group of the District of Columbia explains the importance of the re-enactment of the swearing-in at the Capitol at 10 a.m. and the inaugural banquet re-enactment luncheon at the Willard InterContinental Hotel at 1 p.m.

A Ph.D. in political science who currently writes and lectures on Lincoln, Dr. Elliff is a member of the Abraham Lincoln Association and the Lincoln Group of the District of Columbia.

Tickets for the banquet luncheon and additional information are available at LincolnGroup.org

Q – Lincoln and Washington are often debated as the most important presidents in U.S. history. Why is it so important to remember Lincoln 150 years later?

A – In announcing the Capitol ceremony, the president of the Lincoln Group of the District of Columbia, Burrus Carnahan, stated, “Under the leadership of President Lincoln, our nation passed through its greatest trials and extended to all Americans the fundamental rights which a government of, by, and for the people was founded to protect. Remembering these critical years can strengthen our commitment to the principles of freedom today and in the years ahead. Young people especially will benefit from recalling the struggles for liberty that made this country the last best hope of earth.” 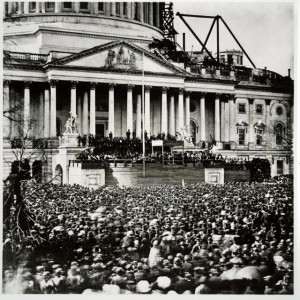 Q – Actor Micheael Krebs will portray Lincoln during the swearing-in on Capital Hill while Sam Waterson, who portrayed Lincoln in Gore Vidal’s Lincoln and voices the Gettysburg Address at the new Gettysburg Visitor Center museum, will read the First Inaugural address. How closely detailed is the event to the original?

A. -Michael Krebs will be sworn-in in costume using the original oath. Sam Waterston will read the complete inaugural address. Waterston’s acclaimed presentation of Lincoln’s Cooper Union Address in New York several years ago is available online. The address will precede the oath, as was the sequence in 1861. In addition to these original elements, the introductory remarks by Lincoln scholar Harold Holzer will follow the precedent of remarks delivered at the Capitol for the centennial in 1961 by poet and Lincoln biographer Carl Sandburg. The location will be different – the new Capitol Visitor Center auditorium.

Q – I hear some of the public will attend the inaugural banquet re-enactment luncheon in period dress and the banquet will include the actual menu. What else does the banquet offer?

A – There will be period music by the Marine Band Civil War unit and a children’s choir, special presentations by Harold Holzer and Sam Waterston, and a principal address by distinguished Lincoln biographer Ronald C. White, Jr.

Q — Can you tell us the significance of the Willard Hotel as host for the banquet luncheon?

A – Lincoln and his family stayed for 10 days before the inauguration at Willard’s Hotel, located on the same corner as today’s Willard InterContinental Hotel. Extraordinary events took place at the hotel as Lincoln made his final preparations to assume the presidency – his surprise early arrival, his meetings with President Buchanan, the cabinet, the Peace Commission, his defeated rival Stephen A. Douglas, his cabinet selections (and their critics), other leading political figures, and members of the public; his remarks on public occasions; final selection of his cabinet, and completion of his inaugural address. Also discussed will be the ways the Willard Hotel has remembered Lincoln’s stay over the subsequent years, including an intriguing twist on the payment of his hotel bill and a children’s story about the slippers provided to Lincoln by the hotel.

Q – Tell us more about the Lincoln Forum. Can the general public join?

A – The general public may join both the Lincoln Forum and the Lincoln Group of DC. Both have websites with membership information. Here are descriptions:

The Lincoln Group of the District of Columbia founded in 1935, is the oldest continuously active society dedicated to studying the ideas and works of Abraham Lincoln. The Group is a non-profit organization that supports the preservation of historic sites, recognizes individuals who make significant contributions to Lincoln scholarship, and honors the memory of President Lincoln. The Group meets monthly from September through June, sponsors other public events and publishes the bi-monthly Lincolnian newsletter. Officers are Burrus Carnahan (president), Karen Needles (first vice president), Craig Howell (second vice president), Paul Pascal (treasurer), John Miller (secretary), and Susan Dennis (membership).

The Lincoln Forum is a national assembly of Lincoln enthusiasts who meet annually at Gettysburg for symposia exploring the life and times of America’s sixteenth president. With 850 members in all 50 states, the Forum publishes a newsletter, maintains an active web site, publishes books, and supports worthy programs around the country. The Executive Board consists of Hon. Frank J. Williams (chair), Harold Holzer (vice chair), Russell Weidman (treasurer), George Buss (secretary), and Edna Greene Medford and Craig L. Symonds, members of the executive committee.