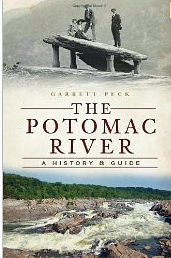 I first encountered Garrett Peck through his “Prohibition in Washington, DC: How Dry We Weren’t” that filled me with tales of Rum Row. Now he follows with another stellar book on our local waterways in “The Potomac River: A History and Guide.”

From sourcing the rivers’ origins far from town to highlighting many interesting stops along the way, Peck does a great job of providing short stories of our region. It’s a quick, easy read filled with lots of fun photos that doesn’t read like a textbook.

Monumental Thoughts asked Peck 5+ questions on his book. Be sure to also check Garrett’s website GarrettPeck.com  and the book’s Facebook fanpage On The Potomac River. The book is available on Amazon, Barnes & Noble, The History Press website and local bookstores. We have an Amazon link below.

1. Your book is an exhaustive but quick read on all the sites along the Potomac and Anacostia Rivers. What was the biggest surprise you uncovered in your research?

The biggest surprise I discovered was the Seneca quarry, located in western Montgomery County, Maryland. It was abandoned in the early twentieth century and simply forgotten, but this quarry had a major impact on DC. It’s where the bright red sandstone came from that built the Smithsonian Castle, parts of the Cabin John Bridge, Locks 8-27 of the C&O Canal, the Capitol Jail (demolished in the 1970s) and more. It is only a few hundred feet from the Seneca Aqueduct on the C&O, but people walk past it without even noticing or realizing there was something so historically significant a stone’s throw away. And there are no signs or a visitors park to explain that the quarry is there. It sits right at the mouth of Seneca Creek in Seneca Creek State Park. Personally I’d love to see a visitor park created someday centered around the quarry.

I took Rebecca Sheir of WAMU 88.5 FM’s Metro Connection to the site recently, and we recorded a story about the Seneca quarry as a forgotten site. It will air on Friday, March 30 at 1 p.m. and rebroadcast on Saturday, March 31 at 7 a.m. at WAMU.org

2. Your favorite site to visit? Mine is Fort Washington Fort because I grew up near it.

I have to say that there’s a tie for my favorite site along the Potomac: Great Falls and Harpers Ferry. Both are absolutely rich in history, both are stunningly beautiful, and both have a tremendous amount of recreation possibilities, from hiking to canoeing and kayaking. Great Falls has a benefit in that it is so close to Washington that you can get there in minutes.

3.  Most locals don’t spend time on the Potomac or Anacostia rivers nowadays. What could you tell them to tour the waters?

It’s an interesting question, and one that really drove my research. We have this stunning river on our doorstep, rich in history and natural beauty, and yet people are so busy with their careers and lives that they only see it as a barrier along their commute to work. Far too few people enjoy the historical and recreational possibilities that the Potomac and Anacostia rivers offer. I mean to get Washingtonians excited about this magnificent river. And unlike many other of the country’s rivers, the Potomac is largely natural with very few levees on it, and just a handful of dams.

The Anacostia has long been called the “forgotten river,” but I hope that people will be open to it. The river is slowly becoming healthier, and you’d be amazed at how much wildlife lives in and along the river. There are many historic sites to see along the Anacostia, along with beautiful and historic neighborhoods along both sides of the river. The Anacostia has gotten a bad rap – and unfairly so. Seeing it reminds us that we have to care for our natural resources and preserve the rich history that lies along its banks.

4. There’s talk of dredging the Potomac to allow bigger ships to return. Would you be for or against that?

I’m be against dredging the Potomac for larger ships. Commercial shipping along the Potomac has largely died out – most shipping has moved to container ports like Baltimore that can handle these massive ships. The old river ports along the Potomac – Alexandria, Georgetown and Waterfront – have largely shifted to recreation, which is fine to me. We should just let the Potomac remain a river without trying to bend it to our will.

5. I didn’t see any ghost stories in the book. Usually there’s a spirit floating around all the sites. Do you have anything that didn’t make the book?

No, there were no ghost stories in the book – but my friend Tim Krepp will be publishing “Capitol Hill Haunts” this fall. I’m sure many ghost stories will come up at the publication party for my book, “The Potomac River.” This will be held on April 26 at Congressional Cemetery, and will be the funnest party you’ve ever been to in a cemetery. The $30 cover goes to support the cemetery’s operations – and includes a copy of the book (signed, natch), cocktails made by the DC Craft Bartenders Guild, and special tours of the cemetery. Visit CongressionalCemetery.org

What didn’t make it into the book was a whole chapter I wrote called “Where Do We Get Our Water?” Given the length of the book, this chapter made the book too long, so we simply cut it. But it’s a fascinating look at how the Washington area gets tap water (did you know the U.S. Army Corps of Engineers supplies it for many of us?). I toured the Washington Aqueduct – the ten-mile Corps aqueduct that brings water from Great Falls to Dalecarlia and Georgetown Reservoirs, then on to MacMillan Reservoir. I also asked, “What happens after I flush?” A question that I answered by touring DC Water’s Blue Plains facility. Yes, Blue Plains offers public tours. And yes, wastewater treatment doesn’t smell very good.

I’m trying to find a blog where I can post this. It’s got a lot of historic and contemporary pictures. It’s one of those massive infrastructure projects that every city needs, yet people totally take for granted.

5+ – Could George Washington throw a dollar across the Potomac like he did the Rappahannock?

No way! There’s no way that George Washington could have thrown a dollar across the Potomac. The river near his family home at Mount Vernon is very wide – not even a potato launcher could fire a potato that far (okay, maybe a punkin’ chunkin’ could). On the other hand, Washington was known to be quite strong and athletic, and it is entirely possible that he threw a dollar (or a rock. Who knows?) across the Rappahannock River where spent his childhood. We have to balance myth with reason. So many myths were invented about Washington, and many don’t hold water.

Rick Snider is a native Washingtonian, long-time journalist and licensed tour guide since 2010.
View all posts by Rick →
This entry was posted in 5 Questions With and tagged best DC walking tours, book, Garrett Peck, The Potomac River. Bookmark the permalink.