I’m gonna get paid back for bragging this, but it’s too good of a tale not to tell.

Killing a couple hours downtown between appointments yesterday, I decided to photograph some monuments for the blog. I grabbed a few dollars in quarters and hoped for the best because I would be in four places where parking is scarce. 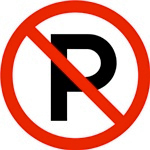 I forgot it’s winter without tourists, though. Lots of parking at times because no sane person would be running around monuments in 30-degree weather.

First stop was Holy Rosary Church on 3rd and F. Sts. N.W. There are 15-minute meters in front and several empty spaces. I said a quick Hail Mary on that one, popped in a quarter and photographed the statues in front of the church for a coming blog post.

I then headed over a few blocks to 5th and I. Sts. for the Chinese Community Church, which I posted last night.  The exterior was returned to its 1852 brick style. There was free parking a half block away in front of another church and also several empty spots. PTL.

I then moved over to 3rd and C Sts. by the courthouses that can be pretty tough to find a space. I found one at the end of the row and popped in a quarter. The sign said 12 hours parking. I’m halfway down the block to photograph the Chess Men in John Marshall Park when a man rolls down his car window to tell me I’d parked in motorcycle spaces and the cops would tow me.

What? Well, I only needed a minute to grab the photo so I gambled knowing I was pressing my luck. But, I got away with it. Sure enough, I looked at the sign closer and it was for motorcycles despite normally wide-spaced lines for cars instead of those thinner lanes. They should restripe those.

Finally, I wanted to see the World War II Memorial, which has no parking nearby unless you’re in the handicapped spaces. I once took some veterans to it that had a handicapped sticker and it was tremendous. You park right by it. We even drove over to the Lincoln Memorial that day just for the fun of parking so close. Normally, I’m thankful I can walk and never park in handicap spots, but it was for the veterans who really did need it so I enjoyed tagging along for the perk.

Anyway, I found a bunch of spots on Constitution Ave. and 17th for free. I mean, a bunch of spots that makes you look suspiciously at signs because it seems too good to be true. But you can park for free during weekdays until 4 p.m. It was only a five-minute walk.

Four spaces, two quarters – I’ll never do that again. But I then drove over to Arlington to pick up my wife from work and parked in the meters in front of her building for free since nobody ever patrols there.

Like I said, karma’s gonna pay me back for this.

Rick Snider is a native Washingtonian, long-time journalist and licensed tour guide since 2010.
View all posts by Rick →
This entry was posted in Washington life and tagged parking, Washington D.C. karma. Bookmark the permalink.